Food and weight-maintenence blog for the POST diet girl

Archive for the ‘rhubarb’ Category

I was told by Potential Future Husband #1 today that he very much looks forward to talking with me every day and gets happy and excited when he sees me pop onto Facebook.

And also that he thinks of me all the time.

I’m feeling pretty great, I have to say.

He also grabbed some free furniture for me just in case I wanted it.

This is how I should feel. Special. Important.

He’s doing really really well. I’m proud of him. We have a hard time expressing our feelings to each other properly (which is why he was so taken aback when I told him I missed him, I’ve never said anything like that to him before) and we’re slowly getting better at it.

The fact that we’ve recently acknowledged to each other that we ever even had sex when we were younger was actually a massive undertaking.

This all sounds stupid to you guys I’m sure. “Well, if you like each other so much, and you KNOW you both feel the same, then WHAT THE HELL, MISS P???”

Just hold on…we’re getting this. I promise.

8-10oz rhubarb sauce* (YES I followed this recipe for this part!)


Begin by mixing together the whole wheat flour, oats, brown sugar, and baking powder in a large bowl.Once well mixed, divide the dry mixture.  Remove 1/3 of the mixture and place it in a smaller bowl.
With the remaining 2/3 of the oats/flour, add in the applesauce.Then, add in 2 T melted butter.  Mix until crumbly.

Mix the 1/3 of the oats/flour mixture with the remaining 3 T melted butter.

Pour the 8 oz {feel free to use more, if you want a more gooey/thick center} of rhubarb sauce over the top of the crust. Spread the filling evenly over the crust.

Top with the oat-butter topping mixture.

Bake for 35-40ish minutes, until bars are lightly browned.

*This was the FIRST TIME that I got a breakfast bar recipe to actually MAKE breakfast bars!!! Most of the time everything comes out a crumbly mess that won’t hold together. THIS ONE WORKED! I was so shocked, the substitution didn’t hurt it at all! YAY! And it was incredibly delicious!! I only ate 3 of the 4 bars I made, SO much food!

I was in such a rush to get shit done before work that I failed at lunch.

Black Bean Soup and Half Turkey Wrap from work.

If nothing else at least I got to make an amazing breakfast.

I’ve been so much happier lately. I hope this streak can stick around for a while. It keeps me eating at least.

I am freaking out entirely now.

I thought I was bad yesterday.

At least I’m going to the house to pack up some more shit before going on my date.

I also made a make-ahead breakfast last night so I could throw it in the oven and get an early start on my incredibly anxious day. 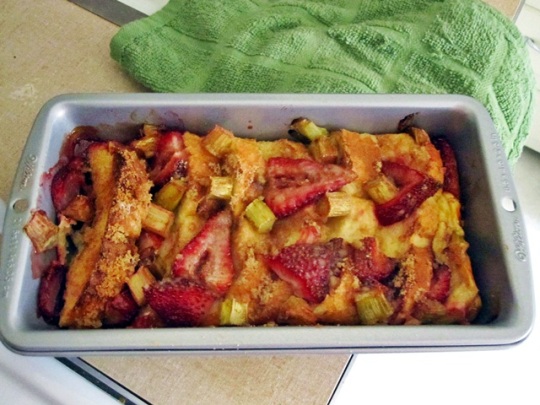 1. Spray a 9 x 13-inch baking pan with cooking spray. Tear French bread into chunks, or cut into cubes, and evenly place in the pan.

2. In a large bowl, mix together eggs and milk. In a small bowl, combine sugar and orange zest. Rub together with your fingers until fragrant. Add sugar mixture to the eggs and milk. Add in vanilla extract and cinnamon. Stir until combined. Pour evenly over bread. Combine strawberries and rhubarb together in a medium bowl. Pour evenly over French toast. Take a spoon and poke the strawberries and rhubarb down into the bread. Cover the pan with saran wrap and store in the refrigerator for several hours or overnight.

3. In a separate bowl, mix together flour, brown sugar, cinnamon, and salt. Add butter pieces and cut into the dry mixture using a fork or your hands. Combine until the mixture resembles sand with a few pea sized chunks. Cover and store mixture in the refrigerator.

*I needed a treat. I needed to do ANYTHING to make me less anxious. I made this the night before knowing I needed to use up strawberries, rhubarb, and sweetened condensed milk. It was so decadent, so custardy and sweet, SO bad for me…I felt great afterwards. Hehe. I only ate half luckily. I had to run to the house at 10 AM to start moving more shit.

Spent 5 hours at the house. At least ex-idiot was cordial and offered me lunch (which I did not take, though it was nice he offered) and shared his york peppermint patties with me. Candy is my sanity-food right now. I did ask him if my handcuffs were still under the bed (yes kids, I own a pair of Smith & Wesson black with blue finish handcuffs…used to use them on Potential Future Husband #1) while he was cleaning under there and asked him to grab them for me.

He knows I’m going on a date tonight. I’m sure his mind is just racing. Good. Stupid idiot.

I got home and unloaded the boxes into the basement. The other tennant was freaking out over this MASSIVE spider in the basement. She said she wouldn’t do her laundry because she was scared of it. She didn’t want to kill it and was actually waiting for me to come home to see if I could help her. Incredibly cute. I assured her I would take care of the situation. I coaxed the palm-sized spider into a bag I was already holding and let him go out next to a tree behind the garage. He was so cute. ^_^

Too nervous to cook.

Asked him if he wants me to show up early. He said yes. I asked him what I should wear. He said anything I want.

Shower
Shave legs, underarms, bikini line (just in case)
Use scented soap I think he would like
Do my hair (it looked PERFECT)
Do my make-up (I pretty much only ever put on make-up for special occasions)
Pick out a beautiful skirt from Express circa 2000
Black button-up shirt that makes me look really thin
Multi-gold 4 inch heels
Re-paint my nails with a pink that my sister-in-law gave me
Pink sapphire heart necklace
No panties

I look so incredibly fabulous and fuckable. NO MAN could possibly resist.

I warn him that I am overdressed. And heading over.

I am so nervous.

I’m shaking as I’m putting on my nail polish. I somehow manage to not completely fuck it all up. I don’t know how.

I tell my cousin that I’m insanely nervous. She tells me not to worry. I got this. I’m beautiful. He already is crazy about me, everything will be fine.

I get there about half an hour before anyone else. He is actually outside when I show up throwing stuff away (obviously cleaning for guests and whatnot). I make a grand exit from my car. He says I am not overdressed. I look awesome. We go in and just casually watch some recorded stuff on TV so he can clear space for the UFC fight to record. We laugh and chat and just sort of…be ourselves. No pressure. I’m feeling less anxious. I remember why I like him so much. I’m so at ease around him.

Guests start to show up. I of course hope they see how hot I am. I hope they’re jealous of him. I hope they tell him hes so getting laid that night while I’m out of the room. I love it.

While watching the fight, we sit close, but not enough to make it completely obvious that we’d rather be all over each other. Commentary from the guys is hilarious. I’ve missed hanging out with this group. A lot. One of the guys brings candy. 4 bags of candy. Hallelujah my fucking savoir. I eat Rolos and Twizzlers and Sour Patch Kids all night. PFH#1 orders pizza, mentions earlier in the evening that he wanted to order the chicken BBQ one, but that he tends to get it without pineapple. I mention that I adore pineapple (of course) and would love it if he ordered it half with and half without.

He just orders the whole thing with pineapple.

THAT. THAT kids, means something to me. Just the fact that he’s willing to try things and go out of his way for me is fucking awesome. Especially when it comes to food. Food means a lot to me. THAT was quite a gesture.

We have an awesome time, I am very much at ease around his friends because I know them all so well already. Its as if we didn’t all spend most of the past 10 years apart.

The boys all leave. I make it RATHER obvious that I am staying behind. I have no intentions of going anywhere yet. He goes out with the guys to throw out the pizza boxes (cleanliness, I like this) and I hope they all told him he was getting laid. I love that I know they’re talking about me. With “good luck”s and all that.

He comes back in and we watch Wilfred, a program I recommended that is awesome. While watching I do eventually make a move and grab his arm and rest my head on his shoulder. He rested his head on mine. It was incredibly pleasant. I could have fallen asleep from contentment. As I go to leave we hug for a little too long in the doorway. I contemplate kissing his cheek. Doing something. We let go and talk for a minute longer. We hug again, as his hands slowly work their way down to my backside,  I give him a very tender, short goodnight kiss on the lips.

He said “Thank you…” afterwards in the most shy way I’ve ever heard.

I miss him so much already.

Miss Pistachio can eat all the candy corn she wants because she is NOT on a diet!